The British Museum is one of the largest and most important museums in the world. It is a classic history museum for all eras from the Stone Age to the present day. In total there are about 8 million objects on display. Every year about 5 million visitors come to the British Museum. The gigantic exhibition is free of charge for all visitors.

Tours through the British Museum London: Of course good tours in groups are also available and can be found on this website. 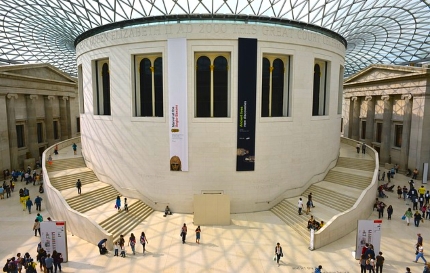 The British Museum is considered the oldest museum in the world, open to the public and still in existence (founded 1753).

According to some statistics, it is currently the most visited museum in the world. Of course, the fact that it does not cost an entrance fee helps.

The British Museum is considered to be the largest museum on earth, at least in terms of the number of objects on display. It is 8 million. Unbelievable. If you look at each object for only 10 seconds, you would need about 2,5 years. No one, not even a museum employee, can have seen everything in the largest of all exhibitions.

The new, futuristic entrance hall by Sir Norman Foster (see picture above) is considered to be the largest public building in Europe. It is bigger than a football pitch.

The reading room is still one of the largest in the world, with over 300,000 books. It used to be the home of the entire British Library. Karl Marx, Charles Dickens, Lenin and other celebrities regularly read millions of books here. The British Library moved to a new, larger building near St Pancras station in 1998.

Here Karl Marx wrote his book “Das Kapital“. It is one of the most controversial works of world literature, but still the most famous book in economics.

What do I have to look at?

The frieze of Parthenon: The Pantheon is a temple on the Acropolis in Athens. The frieze is a decoration surrounding parts of the building. It is world famous.

Lindow-Man: A corpse about 2,000 years old that was found very well preserved in a moor. In England it is similarly known as the Ötzi from the Alps.

Kyros cylinder from Persia (today Iran), 6th century BC. For the first time in known history something like human rights were formulated.

We liked the department clocks, movement and time. You can see large clocks, pocket watches from the 16th century and much more. The highlight of this section of the British Museum for us was the Mechanical Galleon (mechanical gallone), which was probably made in Augsburg at the end of the 16th century. It is a ship model with an incredible number of details made of metal, which was also a clock. Absolutely worth seeing.

The museum building itself is also worth seeing. In particular, the covered inner courtyard designed by Sir Norman Foster some 15 years ago is spectacular. It is the largest covered square in Europe. In the middle of the huge room is the large, old reading room of the British Museum. 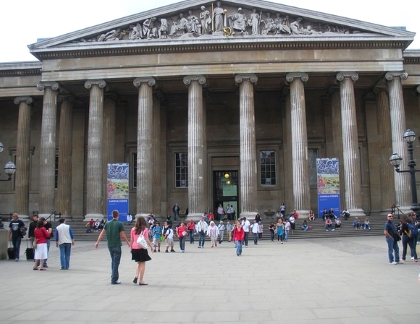 Tours through the British Museum London: Of course this is also available and can be found on this link.

Opening hours British Museum 2023 : The opening hours are simple: daily from 10:00 to 17:30, on Friday even until 20:30. Exceptions are only some holidays like Christmas and New Year.

How to get to the British Museum: Less than 500 metres from the British Museum are the following underground stations; Holborn (near the main entrance), Tottenham Court Road, Goodge Street and Russell Square. Bicycle parking is available. The museum is easily accessible by public transport. Those coming by car will have a problem finding a parking space nearby.

Bus tour from London to Stonehenge

You go by bus 2.5 hours there and 2.5 hours back. In between you are 2-3 hours in Stonehenge. You can have a look at the stone circles and the exhibition in the visitor centre. You will be informed with an audio device (available in many languages including of course English). The journey takes about 7 hours, departure is at 2 pm in summer and earlier in winter.

––>>>>> More information and booking on this link

Other top museums in London are the Tate Modern Museum and the National Gallery.

Everything about Siena Italy, a grandiose city in the heart of Tuscany.

A worldwide Backpacker Guide on the internet.