In Hyde Park you can experience a lot without having to pay admission. The important thing is good weather. The highlights for us were the speakers in Speakers Corner and the many species of birds….

Hyde Park is a park in central London and one of the largest urban parks in the world. From east to west in the 1,000 year old Hyde Park over 3 kilometers long, from south to north about 1.5 km. There are many sight in Hyde Park London:

Things to see in the park

Londoners engage in various activities in their popular park. Many simply go for a walk. Thousands jog in the green space every day. Picnics in Hyde Park also have a great tradition in London.

In the middle of Hype Park is a large lake called Serpentine. Here you can rent pedal boats and rowboats or just watch hundreds of water birds. At the Serpentine lake there is a nice restaurant with lake view (Serpentine Bar & Kitchen). There is also a horseback riding facility. By the way, the swimming in the 2012 Olympic Triathlon took place in Serpentine Lake.

In the southeast of the Hype Park is the so-called Hyde Park Corner. Here, various events take place, such as the huge London Christmas Market (Winter Wonderland).

In the northeast of the green is probably the most famous place in the green, the Speakers Corner. This is where people have freely and openly discussed politics and other things for centuries, the top sightseeing spot in Hyde Park! Beware of confusion: Hyde Park Corner and Speakers Corner are two different parts of Hyde Park.

One nuisance in Hyde Park, in our opinion, is the many dogs. It is, to our knowledge, allowed to let dogs run around off-leash in most parts. This is not good news for people who are afraid of dogs or don’t like the many dog droppings. Also, some birds that breed on the ground are disturbed by the dogs in Hyde Park.

The birds in Hype Park have become so accustomed to humans that some of them even eat out of tourists’ hands. Also gray squirrels (similar to our squirrels, see picture below) are really begging for food. Sometimes you can see many colorful butterflies. 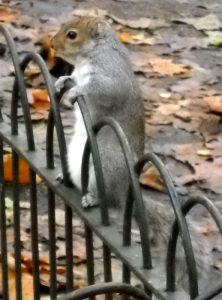 Hyde Park is a birdwatcher’s paradise. According to a private survey by an English bird lover, more than 150 different bird species live in the park in London. Most noticeable are the larger birds, such as the various species of geese and ducks. But also gray herons, Canada geese, whistling ducks, ruddy ducks, tufted ducks, beautiful manta ducks and Egyptian geese are among the water birds in the park in central London. 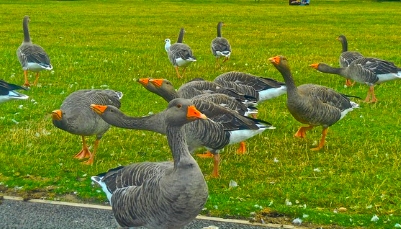 Getting to Hyde Park: There are several subway stations around the park. If you want to go to Speakers Corner, it is best to get off at “Marble Arch” (Central Line, red on map). In the southeast of Hyde Park is the station “Hyde Park Corner” or further back towards Kensington Gardens the station “Knightsbridge” (both Piccadilly Line, dark blue). Heathrow Airport can be reached directly from Hyde Park with the Piccadilly Line, as can the central Piccadilly Circus. The red Central Line, for example, takes you directly to the financial center of the City.