Among them are many world famous paintings. Virtually all important painters are represented with several important works. Highlights are mainly paintings by Dutch, Flemish, French, Italian, British, Spanish and German artists. Altogether there are far more than 2000 works. The gallery is one of the most popular sights in London. In summer and on weekends, one has to queue at some paintings. There is another reason for its popularity: it is one of the very few important art museums in the world that doesn’t cost an entrance fee!

Orientation in the National Gallery is not too difficult. After the entrance you enter a large hall, which divides the entire building into four wings. If one wants to start in the 13th century, one first goes to the Sainsbury Wing (works up to about 1500). Then follows the West-Wing of the National Gallery with works from the 16th century. In the North Wing the paintings from the 17th century and in the probably most important wing with the name East Wing are pictures from the time between 1700 and 1900.

20th century art in London has its own museum of absolute world class – the Tate Modern south of the Thames. 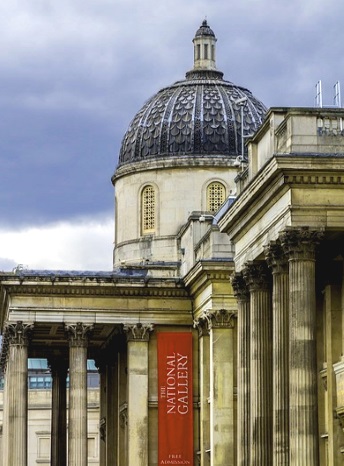 Examples of important paintings in the National Gallery in London

Leonardo da Vinci: “Virgin with Child”, “Madonna of the Rocks”

Rubens: “Peace and War,” “Robbery of the Sabine Women,” “Samson and Delilah.”

Rembrandt: “The Guest Meal of Belshazzar”

Diego Velazquez: “Venus in front of the mirror”

Michelangelo: “The Tomb of Christ”

Joseph Wright of Derby: “The experiment with the bird in the air pump.”

Eduard Manet: “The Music in the Tuileries Garden”

Of course, a museum like the British National Gallery with almost 2,500 paintings is quite confusing. Therefore, it is worthwhile to borrow an audio guide at the entrance.

The museum still buys new paintings, among them about 5 to 10 important works of art every year.

Since 2015 are in the National Gallery London among other things: “Scenes on the Life of the Virgin and Other Saints” (Giovanni da Rimini, Italy), “The Blue Pacific” (Arthur Streeton, Australia), “The Road to the Village of Baldersbronde on a Winter Day” (Laurits Andersen Ring, Denmark).

Entrance fees National-Galerie London 2023 : Entrance to the National Gallery is free! Donations are of course welcome.

Directions National-Galerie London: The National Gallery is centrally located in London at Trafalgar Square. An approach by car is not recommendable due to the hardly available parking possibilities and the London city centre toll. Underground stations are less than 500 metres away: Leicester Square, Charing Cross, Piccadilly Circus

Close by: You can walk from the Art Museum in Trafalgar Square to the Prime Ministers’ residence in Downing Street Ten (about 500 metres), 200 metres further is the Westminster Abbey Church.