In this article we briefly introduce the Tower. Unfortunately, the queues at the famous Tower of London are often very long. We recommend to buy the tickets in advance on the internet on a great website:

>>> Here you can buy tickets for the Tower of London

Tickets on the Internet are paid for in euros. This is usually even cheaper than at the cash desk on the spot.

The London Tower is a large castle in the heart of London right next to the River Thames. The Tower of London is almost 1,000 years old and thus the oldest most important sight in London. The British crown jewels are housed and exhibited in the Tower. For many tourists, the jewels of the Queen are the highlight of their visit to the Tower. Next door is the famous bridge Tower Bridge. 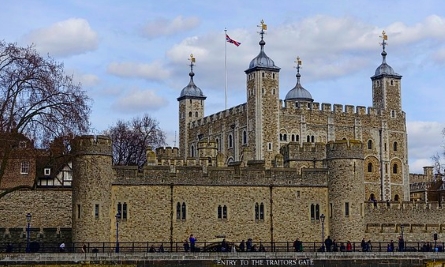 The Tower of London has had many functions in the past. Until the 17th century it was at times the residence of kings. Even better known is its role as a prison, torture prison and place of execution.

Tip: —–>>> Here you can buy tickets for the Tower of London

Until the Second World War, the Tower was at times a high-security prison. One of the last inmates was Hitler’s deputy Rudolf Heß, who was temporarily housed here after his spectacular escape to Scotland.

Why should I visit the Tower?

The Tower of London is undoubtedly one of the most visited sights in England. On our list of sights London it is the number 1. During the visit to the Tower, one sees the world famous British crown jewels – the real reason why many come here. Also the Royal Arms Chamber, the Royal Armouries and the former functions as prison, castle and place for torture and executions find many visitors very interesting. For quite a few tourists, the Tower of London is one of the big highlights of a trip to London. We think the visit is worthwhile.

What are the problems when visiting the Tower?

Long queues: Not infrequently the horror. Often the queue from the entrance is very long. Who wants to spend several hours of a valuable holiday in a queue for a ticket? Below we will show you how you can usually avoid this.

Entrance fees high: As already mentioned elsewhere in this travel guide, in London, the big sightseeings either do not cost any entrance fee at all or one pays a lot. Unfortunately, the tower costs a lot. Adults pay (as of the beginning of 2020) at the cash desk at the entrance almost 30 pounds admission. But we think that the visit of the big castle is worthwhile despite the high entrance fees.

Come without long waiting in the tower. Is that possible? 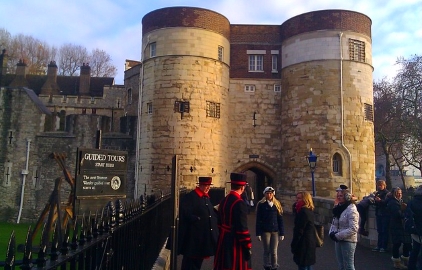 Free admission with London Pass: The London Pass ticket is often worthwhile for tourists who want to visit several sights in a few days. Also in the Tower of London the entrance with the London Pass is free: >>> More information about the London Pass on this page

Opening hours Tower of London 2023: The buildings are open seven days a week all year round. The Tower can be visited from 9 a.m. (Sunday and Monday from 10 a.m.). In summer (March to October) the castle complex is closed for visitors from 17:30, in winter already at 16:30. There is a lot to see in the Tower of London – at least three hours should be planned. As far as we know, the Tower is closed for visitors only on Christmas Eve (Christmas Eve and both holidays) and on 1 January. (as of January 2020)

How to get to the Tower of London: The Tower is located next to the Tower Bridge in the middle of the city. The city centre of London is subject to tolls, parking spaces are scarce and extremely expensive. Therefore, we recommend public transport. The next underground station is Tower Hill. One can also get there with the Dockland Light Railway. Also here, the next station is only five minutes walk from the entrance of the tower. It is called Tower Gateway Station. The following bus lines go to the London Tower: 15,42,78 and 100. Also ships (ferries) of the Thames Boat Service stop nearby.

Audio-Guide: For a fee of about 4 Euro you can borrow an audio guide in different languages, also in German. In our opinion this makes sense.

Toilets / Access for disabled / Wheelchair 2023: To our knowledge, one area, such as the crown jewels, is accessible to people in wheelchairs, others only accessible via stairs. There are several toilets, including one for the disabled. Among the tours offered in the Tower is also a tour for blind people. There is also a place for “baby care” (changing diapers, etc.). The friendly staff at the London Tower will be happy to help you with any problems you may have.

Restaurants / Catering in the Tower of London: For the many tourists there is a cafe with hot meals, sandwiches and so on. There are also some kiosks with snacks, pastries, ice cream and drinks.