This article provides an overview of England’s largest airport and tips on getting from the airport to central London quickly and cheaply.

How big is the airport?

Heathrow Airport has only 2 runways and 4 huge terminals. Heathrow Airport is about 20-25 km as the crow flies west of central London. The two runways are no longer sufficient. The construction of a third runway at Heathrow has been planned several times, but is very controversial. Under the current plan, an entire village would have to be resettled. Without the third runway, London Heathrow can no longer grow significantly and will soon lose the title of Europe’s largest airport. It is only one of six airports around London. 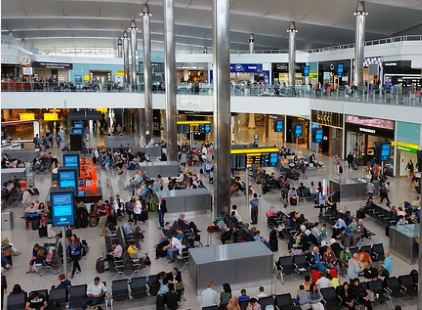 Heathrow Airport is very large. Most of the terminals are within walking distance of each other. The four terminals are 1, 3, 4 and 5. Terminal 1 is not currently in operation (as of 2020). It will be rebuilt and then integrated into Terminal 2. The distances between the terminals are long. There are buses and trains, you can hardly walk. The buses run about every 20 minutes, the trains about twice an hour. The use of these public means of transport is usually free of charge (better to ask).

From Heathrow Airport to London

The Heathrow Express 2022 train between Heathrow Airport and London

Fast and convenient 15 minutes to London: The Heathrow Express is a fast train that connects Heathrow Airport with downtown London directly and without a stopover. The journey takes just 15 minutes. However, the journey costs up to 25 pounds one way or 37 pounds round trip (as of early 2020). Some passengers are said to have paid more for the Heathrow Express than for their flight ticket. In London, the express train stops at Paddington Station. This station is about 3 kilometres west of the centre of London (Soho). The Heathrow Express runs every 15 minutes in both directions from about 5 am to 11:30 pm.

The normal metro between Heathrow Airport and London

Inexpensive, but slow and uncomfortable: The journey with the normal subway is much cheaper, but also much longer. The Piccadilly Line, one of the 11 big underground lines of London, runs at least every 10 minutes in both directions. This subway runs daily between 5 and 23:30. If the subway does not run, there is a night bus (number N9). An advantage is, of course, that this underground stops frequently in London (e.g. very centrally at Piccadilly Circus). A single trip costs (beginning of 2017) 6 pounds. You can also buy a Travelcard (day ticket) at the airport or on the internet, if you plan to take the underground more often on the same day. As far as we know, all stations around the airport are located in zone 6 of the London public transport system.

The disadvantage of the normal subway is not only the longer journey time, but also the fact that the underground trains are often overcrowded. A one-hour subway ride with luggage can ve a bad start of a holiday.

By bus to and from Heathrow Airport 2023

In about 60 minutes from about 5-6 pounds: The company National Express offers many buses from Heathrow Airport to London and many other cities in Great Britain. National Express also offers direct buses to all other airports around London – some several times per hour. Most buses to London go to the large bus station behind Victoria Station in the centre of the metropolis. But there are also buses that take passengers directly to the desired hotel in London. All in all the bus transport to and from Heathrow airport is well organised, there are many buses and the fare is cheap, to London one way about 5 to 6 pounds.

By taxi to Heathrow Airport

If you would like to take a taxi to or from Heathrow Airport despite the many offers by public transport (see above), you can of course do so. A trip to London takes a good hour and costs about 50 to 70 pounds. The typical English taxis are usually available in sufficient numbers at Heathrow. So-called minicabs are a few pounds cheaper. In many cases it is faster (and cheaper) to take the train Heathrow Express to London (Paddington station) and from there continue by taxi.

Limousine Service Heathrow: If you want to spend even more money, a personal chauffeur can pick you up in style directly at the exit.

How much does parking at Heathrow Airport cost?

Short-term parking: The parking spaces at Heathrow Airport are not the cheapest of all: two hours, for example, will cost about 11 pounds in 2020.

There are also business parking spaces, which are more expensive, but very close to the terminals (long-term and short-term).

Is it possible to cycle to Heathrow Airport?

You can also cycle to Heathrow Airport. Some do this to save parking fees for cars. Bicycle paths lead to the airport. There are places where you can park bikes for free. In other places the parking of bicycles is forbidden.

Airlines and destinations from Heathrow Airport

The following list of airlines and destinations from London Heathrow is by no means exhaustive. The list is slightly older (2015). These are only examples of flights from Heathrow:

All data on this side, like on all other sides of this Website, naturally without guarantee. Many data are from the year 2018 or from 2020, some are older.