Those who are in a big city for the first time often have an orientation problem. The following short information is meant to help tourists to find their way in London faster.

Where is the center of the city ?

Where exactly the center of London? It is not entirely uncontroversial. There is a so-called Centre Point. This is the official centre of the city of London. On this point there is a skyscraper. On the skyscraper, which is partly visible from a greater distance because of its height, there is “Centre Point” in big letters. The Centre Point is located about 1,5 km north of the Thames. The nearest underground station is Tottenham Court Road, less than 100 metres from Centre Point. There is a tall house at the Centre Point (see picture). 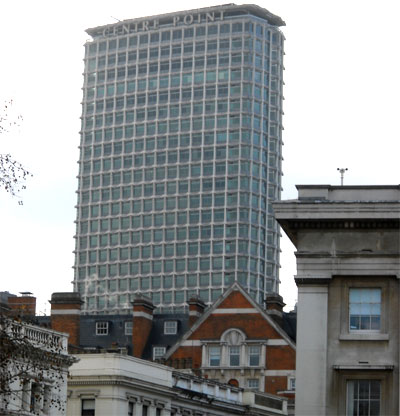 However, the official centre is not the felt centre of the city for all Londoners and tourists. For many, the true centre of London is the Picadilly Circus, a square about 1000 metres south-west of the Centre Point. The Piccadilly Circus is about 800 metres from the River Thames. Others say that the centre of London is Oxford Road, the city’s main shopping street. This street is only a few hundred metres west of the Centre Point.

Where are the big sights in London ?

Most of the sights of London are in a rectangle north of the Thames. It is about 5 km long (from east to west) and 2 km high (from south to north). Boundary points: In the west it is Hyde Park, in the east Tower Bridge, in the south Thames and in the north Centre Point. Some newer important sightseeings are also south of the Thames, but then mostly directly at the shore. These are for example the Tate Modern Museum or the London Ferris Wheel.

The River Thames as a landmark

In the direct centre, the Thames flows from west to east. The river divides the city into two parts and is a very important landmark. There are many bridges across the Thames. All can be used by pedestrians. The Thames is therefore no obstacle for visitors to London.

Can I see London on foot or do I need the subway?

That of course depends on how good you are on foot and how long you have. If one divides the visit of the centre of London into 2-3 days, one does not necessarily need the subway. But the feet will hurt in the evening. It is a good idea to divide the city centre into east and west. The eastern main attraction is the Harrods department store, the most western probably the Tower Bridge. A day on foot is definitely not enough for everything. 3 days are ideal. But those who want to visit museums should plan some extra days.

However, a subway ticket is absolutely necessary for the sights outside the city centre. These are for example the Camden Market, Greenwich, the Docklands or the world-famous wax museum London.

What is Inner London and Outer London ?

These two terms are often heard in London. It is the fundamental division of London into two parts.

Outer London: These are the remaining 20 Boroughs of London, outside the centre. Outer London has a diameter of about 40-50 km, an area of 1250 km² and 5 million inhabitants.

The best parking garage in Venice is Autorimessa Comunale, the prices and location.

Besides London, Stonehendge is one of the most popular destinations in southern England.