The London Eye is the highest and largest Ferris wheel in Europe with a height of about 135 meters. It is located in the middle of London directly at the bank of the Thames. From above, one has a great view over the city. The London Eye is also known under the old name “Millenium Wheel”.

History: The London Eye was opened in 2000 on the occasion of the turn of the millennium. Hence the name “Mellenium Wheel”. It was supposed to last only for a few years. But since the London Eye is very popular and has become a landmark of modern London, it will now remain there indefinitely.

Records: The London Eye was the largest Ferris wheel in the world at its inauguration in 2000. The great success, however, also spread in Asia. In recent years, even larger Ferris wheels have been erected in China and Singapore. This was followed by the USA. “The High Roller” in Las Vegas is the world’s highest travel wheel with a height of almost 167 metres (8Stand at the beginning of 2017). Larger than the Giga wheel in London are also the Singapore Flyer and the star of Nanchang (China). So the Ferris wheel on the Thames in London is currently number 4 in the world and still the largest Ferris wheel in Europe.

The London Eye is also suitable for wheelchair users and people with many other disabilities (advance information and advance reservation useful). For some years now, there has also been a 4D experience feature which shows things like wind, snow or a New Year’s Eve celebration at Millemium Wheel. (As at the beginning of 2017). Our ticket included the 4D cinema.

By the way, Coca-Cola sponsors the largest Ferris wheel in Europe, so the official name is now Coca-Cola London Eye. 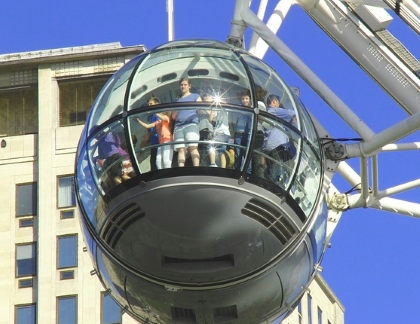 London Eye ticket prices 2023 : This is no easy subject. Adults will pay between £27 and £40 in January 2022 , depending on the ticket, if you buy the ticket online in advance. As far as we know, it can be a bit more expensive at the cash desk next to the sightseeing.

We can’t say it often enough: We think booking in advance on the Internet is highly recommended. Save yourself the time in the queue. Hours of queuing for a ticket should not be the content of a nice day’s holiday in London. More information like current prices and the possibility to buy a ticket for the London Eye can be found on this website.

London Eye Opening Hours 2023 : The London Ferris Wheel runs daily. At Christmas and in January it is closed for a few days for annual maintenance. In 2019 this will be the case from 8 to 23 January. The first trip is around 10:45 in the morning. In the evenings, the London Eye turns until 8 p.m. in winter, 9 p.m. or 9.30 p.m. in summer. A ride with the Millenium Wheel in the darkness over brightly lit London is also an interesting experience. The travel times for summer 2020 may still change (as of January 2020).

By the way, another nice tour is an excursion by ship on the river Thames, among other things with a drive past the sightseeing London Eye..

How to get to the London Eye: Due to the hardly available parking places in the city centre, the best way to get to the London Giant Ferris Wheel is by subway. The next underground station is “Waterloo”. Also “Westminster” and “Embankment” on the other side of the Thames are much less than 1 km away. One can hardly miss the high Ferris wheel and landmark “London Eye”. If you don’t see it immediately – just walk towards the river Thames.

Places of interest near the London Eye: Big Ben and Westminster Abbey are just a few hundred metres away on foot across the nearby Thames Bridge. After a 1 kilometre walk along the banks of the Thames (north-east) you are at the Tate Modern Art Museum (no entrance fee).

What are you from the London Eye? A 1 minute video