Westminster Abbey is one of the two large and famous churches in central London. The other is St Paul’s Cathedral. Traditionally, Westminster Abbey has been the site of the coronations and burials of the queens and kings of England for hundreds of years. Also many great royal weddings have taken place in Westminster Abbey. Prince Williams married Catherine here in April 2011. 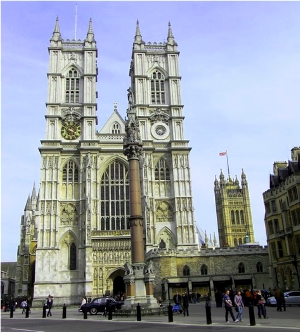 What’s there to see?

For the first time, probably in the eighth century, a church stood on the site where Westminster Abbey stands today. The present building dates from the 13th century and is predominantly Gothic in style.

There is a lot to see in Westminster Abbey. On the one hand, the many graves of kings and statesmen are interesting in the impressive building. There is also a good museum in the church. The highlight for many visitors is the richly decorated coronation chair on which the queens and kings of England have been crowned for centuries. All the kings of England have been crowned in this church for centuries.

About 20 former queens and kings have found their last rest in the abbey church. Also the grave of many other very important people is in the church. For example, the graves of Charles Darwin (researcher), Charles Dickens (writer), Isaac Newton (scientist) and Robert Stephenson (inventor) are in Westminster Abbey.

Westminster is the part of London where the church is located.  An abbey is a monastery where an abbot presides.

Close by:  London’s landmark, the Big Ben Tower, is only 100 metres away. The famous Downing Street 10 and the largest Ferris wheel in Europe can also be reached on foot in a few minutes from the church of Westminster. Also to the Aquarium Sea Life, opposite at the other bank of the Thames, it is only 200 metres.

Information for the visitor

With a London Pass you can visit the church for free. The London Pass is a tourist ticket for one or more days for many sights in London, also available as an option with local transport ticket and Hop On / Hop Off bus. You can buy the London Pass online

Westminster Abbey by Underground: Take the subway to Tube Station with the simple name “Westminster” in the heart of London. Three lines meet here (Piccadilly Line, Victoria Line and Jubilee Line). The church can be reached quickly and easily by public transport.