This article gives an overview of the new city district and shows why visiting the Docklands is a great thing for tourists.

What are the Docklands?

The port used to be: London once had the largest cargo port in the world. In the east of the city were huge areas of London for a long time port area. After 1960, when more and more large container ships conquered the oceans, the Docklands experienced an unprecedented and rapid decline. The Thames and the Docklands were too small and too narrow for the new large cargo ships.

The Docklands today: The site was destroyed, tens of thousands of dock workers became unemployed. The British government under Thatcher decided to take a radical and courageous step. A new, gigantic district was to be built. Tax relief, billions of pounds of public funds, and London’s rise to become the financial capital of Europe all led to a unique real estate boom. Huge office buildings, shopping centres, luxury apartments, marinas and other buildings were built in gigantic dimensions: The three highest skyscrapers of Great Britain are located in the Docklands (200 – 240 meters high). In a good 20 years, the Docklands have gone from being one of the most run-down areas of the country to one of the most modern districts in the western world. 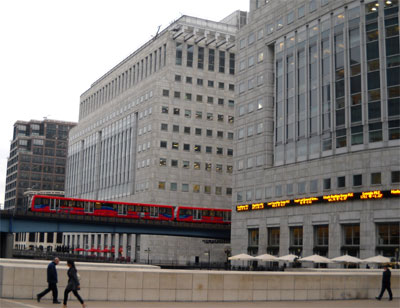 The center of the new Docklands

The heart of the new Docklands is the Isle of Dogs. The Canary Wharf building complex is located on the island. In addition to “One Canada Square”, the highest building in Great Britain at almost 240 metres, around 30 other large buildings were erected here. In and around Canary Wharf alone, 100,000 people are currently working, mainly in offices.

Traffic in the Docklands

To solve the traffic problems in the Docklands London the S-Bahn similar to DLR (Docklands Light Railway) was built. The railway is one of the first driverless train systems in the world. It operates on several routes in Docklands London. Above all, the elevated railway lines built on pillars (see above) look futuristic. However, DLR’s capacity soon became insufficient, and the construction boom in the Docklands was initially completely underestimated by urban planners. The extension of the London Underground (Jubilee Line) to Canary Wharf, which was completed in 1999, provided initial relief.

Further rail infrastructure projects are under construction. In particular, the Crossrail project will bring further improvements. The new rail across London is expected to cost £15 billion. In 2009, construction work began at Canary Wharf. According to the current status (early 2017), the entire line from Reading to Shenfield is to go into operation in 2018 oe 2019, some sections of Crossrail (also known as Elesabeth Line) are already completed (status 2017).

Even a small commercial airport, London City Airport, was built in the Docklands. What is very positive about the new Docklands is the small number of roads and cars.

Memorial Docklands: Some things of the old harbour infrastructure, like big loading cranes (see picture below) were left standing as monuments of the old times. Between the modern office buildings, old social housing looks like foreign objects. The majority of Britain’s major banks, financial groups, newspapers and media groups now have their new headquarters in Docklands London. 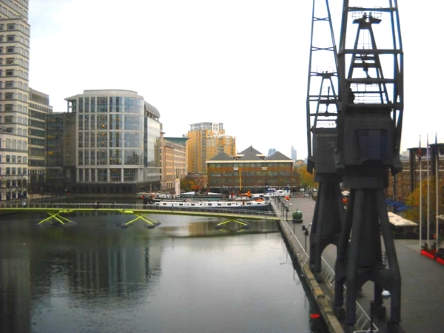 Tip for holidaymakers: Take the train through Docklands

As a tourist, you get a good overview of the Docklands on a trip through the Docklands with the DLR elevated railway. But be careful: The rear (eastern) part of the Docklands, seen from London, is no longer in the area of the London tariff zone 2. Those who are caught without a valid ticket pay a fine of 50 pounds (as of 2010). A walk through Canary Wharf is also a must. There are several large shopping centres in the buildings around the DLR Canary Wharf stop. The best day to visit Docklands London is a weekday. Then the many businessmen are on the way. Who likes it calmer, can come also on Sunday. Also then, as everywhere in London, most shops are open. 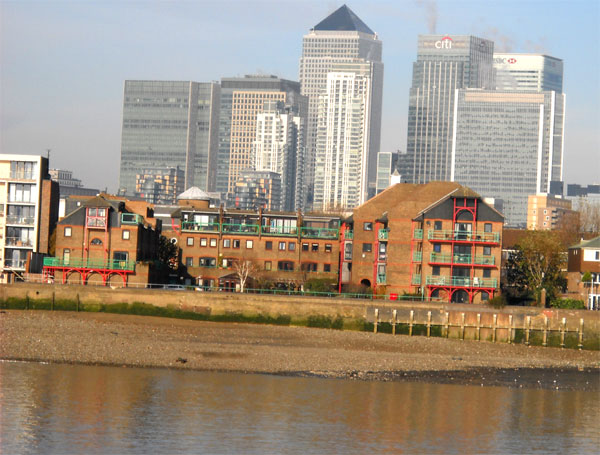 Tip: Visit Greewich opposite on the same day

A pedestrian tunnel under the Thames leads from DLR’s southernmost stop in Docklands London to Greenwich. The picture above shows Docklands London from Greenwich. Greenwich is known for its longitude zero and is considered the central point of the world’s time zones. In Greenwich you can stand with one leg on the eastern hemisphere of the earth, with the other leg on the western hemisphere.