Here you will find information about the interesting London Chinatown including tips for restaurants and shops. The visit is especially worthwhile for people who have never been to China before or who have seen a Chinatown.

Overview: Like many of the big metropolises in the western world, London has a Chinatown. Nowadays, Chinatown is a tourist attraction. Many of the offers in the shops and restaurants are mainly meant for tourists. But there are also shops in which the offers are only written in Chinese characters and which have almost only Asian customers. 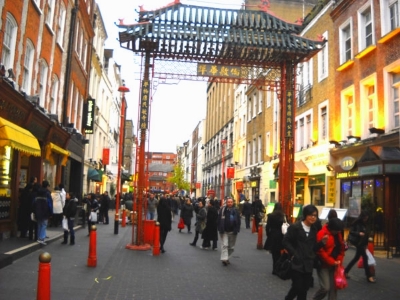 The entrance to Chinatown London (see picture above) is marked by a large Chinese gate. The gate in Gerrard Street is a popular photo motif. The Gerrard Street is also the main tourist lane in the Chinatown of London. It is a small pedestrian zone. In it you will find about 20 shops and restaurants, which are mainly aimed at western customers. If one walks around one or two corners, the prices are, especially in the restaurants, a little lower than in the Gerrard Street. You can also see Chinese lawyers, tax consultants, traditional massage salons and much more. 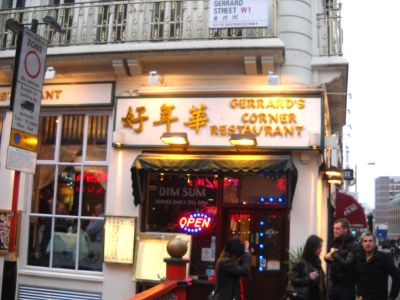 Food in the Chinatown in London: Some good restaurants can be found in the Lisle Street, a parallel street of the Gerrard St. Many restaurants, especially for tourists, have specialized in buffets with the motto “All you can eat”. The best known and cheapest is Mr Wu at Whitcomb St. Here you can eat as much as you want for only 7.95 pounds (as of early 2018, plus 10% service fee). It could be the cheapest buffet restaurant in Central London. But the food in “Mr Wu” is only mediocre in my opinion. Other all-you-can-it buffets in the Chinatowns offer a little more money, higher quality and more choice. But “Mr Wu” is a bargain experience. Not all restaurants in Chinatown offer buffets. Main courses often only cost between 7 and 12 pounds. So Chinatown is probably the cheapest area in Central London for lunch or dinner in a restaurant.

Buy groceries: In some shops in Chinatown London you can still buy original Chinese food. Tourists often like the roasted ducks hanging in the shop windows, for example in the restaurant Hung`s. The ducks taste very delicious.

Harry Potter tour from London to the film studios outside the city. It is currently the most popular day trip from London >>> More info

Also in one of the original Chinese bakeries and in one of the Chinese supermarkets one should definitely have a look. If you like Asian cuisine, you can buy spices, sauces and many other great Asian things here. The China Town also smells like Hong Kong or Beijing.

Until World War II, London’s Chinatown was much larger than it is now. It was largely destroyed by German air raids during the war. Many of the Chinese then moved to other parts of the city. All official street signs in Chinatown are still bilingual (English and Chinese).

For rock music fans, the little Gerralds Street in Chinatown has a completely different meaning. The band Led Zeppelin rehearsed here for the first time in 1968. The famous song “Train kept a rolling” is said to have been written here in a cellar. By the way, there are other Chinatowns in Europe, for example the Chinese quarter of Amsterdam or Rotterdam.

Other things shopping: There are many, mostly smaller shops offering cheap products from Asia. Caution: Many of the goods offered in Chinatown in London (clothing, jewellery, toys, etc.) are imitations (modern fakes). Haggling is common in London’s Chinatown. The prices for goods and services are often cheaper than elsewhere in London.

How to get to Chinatown London: The area is in the absolute centre of London and is very easy to reach. Chinatown is located between the two subway stations Piccadilly Circus and Leicester Square in Soho. Soho is the centre of the city.