“The Shard” is the name of the tallest skyscraper in the UK and the EU. It is in the centre of London. The skyscraper is 310 metres high, it was completed in 2012 and 2012 respectively.

Viewing platform The Shard: Almost at the top, on the 72nd floor, at a height of over 230 metres, is a viewing platform. As a tourist, you can take the lift up there. It has become one of the most popular attractions for visitors to London. Because of the large crowds, you should definitely buy tickets for The Shard online in advance. Tickets are available on this website. From the top, you have a magnificent view over the whole of London, with very good visibility you can see over 50 kilometres away. There is no better view of London from anywhere, not even from the famous, much lower London Eye Ferris wheel. 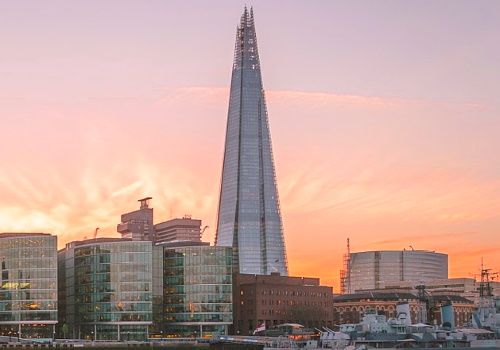 What’s inside The Shard skyscraper?: The building is slightly pyramid-shaped, which means the base is largest at the bottom and gets smaller towards the top. On top of the 72 floors is a large and high spire, the interior of which is also partly used. At the bottom of the entrance area are plants and benches. Directly above is a shopping centre. Now follow many floors with offices. Above that is a high-class hotel and a luxury restaurant. Further up are large and very expensive luxury flats, some costing around 70 million euros. Above that is the visitor platform on the 72nd floor (tickets). The top houses building services, among other things.

Construction The Shard London: The vast majority of the owners are from Qatar. After long delays, construction of The Shard finally began in 2009. The construction time was around 3 years, and in April 2012 the new skyscraper in London was ready. In July 2012, the building was inaugurated by the Prime Minister of Qatar. Most tenants moved in during 2013 and 2014.