>>>>>> Link with an overview of Harry Potter tours in London

How do the Harry Potter tours work?

Actually quite simple: The participants meet at the agreed place in London. You take the bus to the film studios. You watch everything and then take the bus back to London. There is the Making-of-Harry-Potter-Tour with and without a guided tour. The majority of the tourists in London book the trip without a guide.

Which Tour providers are there in 2023 ?

Since the trip to the Harry Potter film studios Warner Bros. is extremely popular and the place is not easily reached by public transport, tens of thousands of tourists take part in bus trips. There are several companies that offer such tours.

The tours of the different providers are similar, but differ significantly in detail. We have selected 3 very good offers for you below.

The tours we have selected have meeting points in central London in the city near a large metro station. It is also important to have enough time in the film studio to watch everything. One needs at least 3-4 hours. We also made sure that the selected tours in the internet were well evaluated by the participants.

In the price the offers differ rather little. London is an expensive city, which unfortunately also applies to excursions and entrance fees. A reasonable tour to the Harry Potter Studios takes 6-7 hours with a return trip. The tours cost approximately 100 to 150 euros. All day tours suggested below include bus transfer and admission.

This tour has a central departure point in London which is easily accessible by underground. In the studios you have enough time to watch everything (about 3,5 hours). This day trip is comparatively cheap with around 100 Euro (2022). There are several departures per day, you can choose the departure time. The tour is rated very high on the Internet.

>>>>> Much more information and booking

>>>>>> Much more information and booking

Who can spend 50 Euro more for a great Harry Potter tour should have a look at this offer. With the guide you see much more things than the normal visitors of the Warrner Bros. studios. Meeting point of the bus tour is again in the middle of London.

>>>>>> Much more information and booking 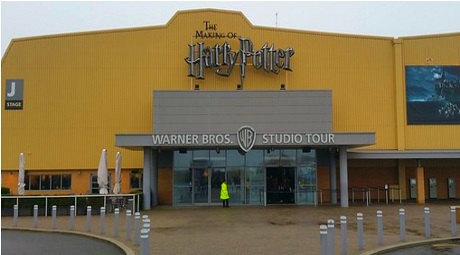 The exhibition focuses on the making of the Harry Potter films.

Almost all visitors are enthusiastic. On the way back in the bus the experiences were discussed enthusiastically. This applies to both children and adults. We have rarely experienced such enthusiasm on a day trip, no matter where in the world.

You see a lot of original objects from the film. The details make the tour so interesting.

We also found the butterbeer interesting, even though not every visitor likes it.

Many original clothes from the Harry Potter movies are also a highlight.

Money / currency / credit cards: You cannot pay with Euro in the Warner Bros. studio (shops, food, drinks etc.). Only pounds are accepted as cash or credit cards such as Visa, Master Card and American Express. As far as we know there is an ATM in the entrance area.

Shopping: Absolutely awesome, we can’t say otherwise, are the many Harry Potter souvenirs that you can buy in the shops in the Warner Bros. studio. However, many visitors only look, the prices are partly quite high. Magic wands, for example, are popular among shop visitors. Also on the way, during the tour, there are some shops to the respective topic like the “The Forbidden Forest Shop” or the “The Railway Shop”. Buying Harry Potter souvenirs in the Warner Bros Studio is very popular with real Harry Potter fans. Of course there are also scarves, T-shirts, pullovers, caps, jackets, etc.

Wardrobe: There is a wardrobe for jackets, backpacks, bags etc. at the entrance of the tour through the film studio of Harry Potter. (free of charge)

Children / Baby: Children are welcome in the Harry Potter Studio. There are also changing tables, etc.

WIFI: This is also available free of charge in the visitor halls of the film studio near London.

Cafes / Restaurants: Available in the lobby as well as in the exhibition. There is everything from burgers and sandwiches to larger dishes. Healthy food and salads are also offered. We had noodles (rigatoni) with vegetables for about 7 pounds (2020).

After the visit one sees the HP films different. We watched some Harry Potter movies at home and compared the experience in the studios with the movies.

>>>>>> Link with an overview of Harry Potter tours in London

What to Bring: It’s a good idea to bring a bottle of water and a snack on the bus tour. By interntional standards we think everything is rather expensive.

Duration of Harry Potter visit: The whole Harry Potter exhibition is quite extensive. In 3-4 hours you saw the most important thing.

Duration of a tour from London: Our tour took about 7 hours. So it is a full day trip. We sat about 3 hours in the bus and were about 4 hours in the film studios of Warner Bros. (distance from London city center about 40 kilometers).

Conclusion: It was more than worth, it was the highlight of the London trip. It’s not a big deal, but the many great little things that make a visit to the Warner Bros Studios an unforgettable experience.

Name of the tour: The tour is often referred to in English as “Warner Bros. Studio Tour London” or “The Making of Harry Potter”. The word Warner Bros. is sometimes only written as WB, i.e. WB Studio Tour or similar.

Popularity of the tour: The Warner Bros. film studio is one of London’s most popular excursion destinations. Many tourists also book excursions to Stonehenge.

Further excursions and sightseeing tours in London around Harry Potter

You can find many more tours, also from other cities like Manchester, as well as city tours about Harry Potter in London on the link below.

On the link below there are also longer tours which combine a tour to Warner Bros. Studios with a trip to Oxford (both are north-west of London).

>>>>> Link with an overview of Harry Potter tours in London